The God of Thunder returns in Thor: The Dark World, the sequel to 2011's Thor. Set to be released on November 8th of this year, the superhero flick is directed by Alan Taylorand sees Chris Hemsworth returning to the role. Also coming back is Natalie Portman as Jane Foster, Tom Hiddleston as Loki and Anthony Hopkins as Odin. 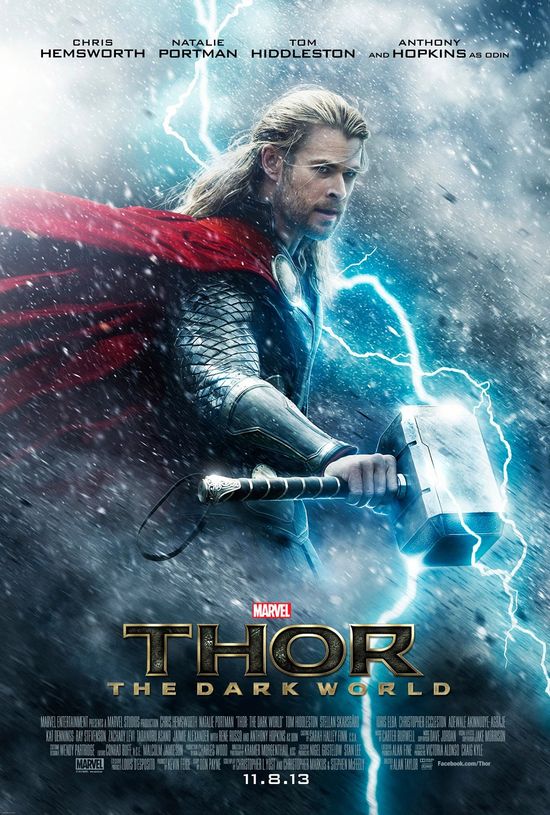 The poster has debuted courtesy of the Thor Facebook page and depicts the Avenger emerging from a storm with lightning striking around him and his hammer, Mjolnir.

Get ready for the Thor sequel with a prelude comic book that bridges the gap between The Avengers and Thor: The Dark World. And may reveal some of the questions that have been begging for answers...like what was the dark matter that Odin had to conjure up to send Thor back to Earth and does that tie into the "Dark World".

From Marvel:
An all-new adventure leading you directly into the upcoming Marvel Studios blockbuster THOR: THE DARK WORLD! What happened to your favorite Asgardians between the events of THOR and THE AVENGERS? What comes next? Find out here!

Marvel's Thor sequel may still be awhile away with its November 8 release date. However we do have a synopsis for the movie:

Marvel’s "Thor: The Dark World" continues the big screen adventures of Thor, the Mighty Avenger, as he battles to save Earth and all the Nine Realms from a shadowy enemy that predates the universe itself. In the aftermath of Marvel’s "Thor" and "Marvel’s The Avengers," Thor fights to restore order across the cosmos...but an ancient race led by the vengeful Malekith returns to plunge the universe back into darkness. Faced with an enemy that even Odin and Asgard cannot withstand, Thor must embark on his most perilous and personal journey yet, one that will reunite him with Jane Foster and force him to sacrifice everything to save us all