#BLURAY: Amazon Prime Service Is Super When It Comes To Man of Steel Set 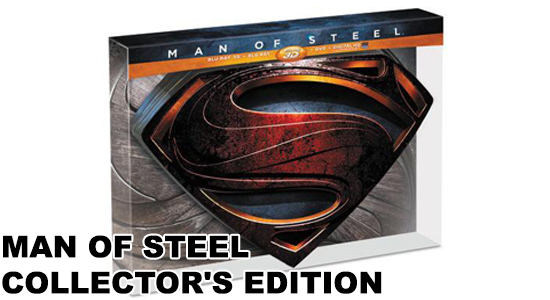 When I first heard about the Man of Steel Collector's Edition in August, I placed my pre-order via the WBstore.com and that was on August 24, 2013.

I figured it would ship slightly before release date (November 12th) so I would get it around there.

Well, on November 12th I decided to check the status of my order on the WBstore and to my surprise, I discovered that not only had the order not shipped, but it was actually “IN PROCESS”. What does that mean?

Continue reading "#BLURAY: Amazon Prime Service Is Super When It Comes To Man of Steel Set" » 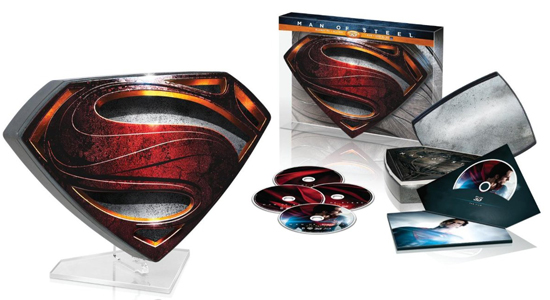 How much did you like the latest Superman movie, Man of Steel? Ready to go all out and bring home the Limited Collector’s Edition? The WB Shop has made this exciting set available for pre-order and it is actually pretty super.

Aside from containing the DVD, Blu-Ray, 3D Blu-ray and Digital Copy, this set comes with a nice display that looks like it houses your discs; a limited release metal “S” glyph with lucite glass stand. Take a look at the picture above to see what you can expect.

Currently the Man of Steel 3D Limited Collector’s Edition is available for pre-order via the WBshop.com. Which is where I have already pre-ordered it. While the collector’s set is listed on Amazon, it’s not yet available for purchase from the site.

Also of note; the Man of Steel Blu-Ray includes the following special features:

· Journey of Discovery: Creating “Man of Steel” – This immersive feature-length experience allows you to watch the movie with director Zack Snyder and stars Henry Cavill, Amy Adams, Diane Lane and others as they share the incredible journey to re-imagine Superman.

· All-Out Action – Go inside the intense training regimen that sculpted Henry Cavill into the Man of Steel and Michael Shannon and Antje Traue into his Kyptonian nemeses. Includes interviews with cast and crew.

· Planet Krypton – The world’s first exploration of Krypton and its lost society.

The latest and final Zack Snyder's Man of Steel theatrical poster has been revealed.

Hot damn. The latest trailer for the upcoming Superman movie, Man of Steel, delivers the goods. The three minute trailer gives you everything you need to make sure you get yourself to a theatre on June 14th.

The first time around, I wasn't taken in by the initial trailer. I made mention of that before, here. But this...this is just awesome. Watch it HERE:

Right from the start we see Krypton and Jor-el, and even glimpses of the Fortress of Solitude.

By the two minute mark, I was happy. BUT there is still another minute to go! ...and we get...ZOD. Nice to know he's still pissed off. "I will find him!" the threatens referring to the Son of Jor-el.

We find out what the "S" on his chest stands for, explosions of what looks like Metropolis getting blasted and a tease of the Superman/Zod throwdown that'll probably win an 2014 MTV for Best Fight of the Year.

Lots of incredible imagery. I really think Kevin Costner is going to shine in this film. Perfect casting as Pa Kent.

The only thing that could have made this trailer better would have been a cameo by Batman. Suffice, to say I really dug it. I think MOS still has a ways to catch up on the Iron Man 3 social media front, but it looks like the marketing team just kicked things into overdrive.

The Warner Bros. Youtube page released a new TV spot for Man of Steel. The video is only 32 seconds and looks to be comprised of clips that we have already seen. The coolest part is Kal-El (Henry Cavill) asking the question “My father believed that if the world found out who I really was, they’d reject me. He was convinced that the world wasn’t ready. What do you think?”

NEWS: 5 Things I Didn't Like About The MAN OF STEEL Trailer

Before we start, you have seen it already, right? If not, go here.

Ok, and here we go. I'm not 100% on board yet. Trust me, I want to be, but I'm not there. What has been presented so far either seems kinda like a downer or stuff we are already familiar with.

1.) Young Clark has to hide his powers, yes, yes, We know about that already. Why does it that take up as much space in the trailer as it does is odd. The overall message seems to be that Kal/Clark will be a hero. But...again, we know that. We know Superman will be the hero, he's pretty much the definition of hero. I'm not very excited to see a story where Kal grows into Superman, we had that for 10 years in Smallville.

3.) The random explosions are just that. there is not context as to danger, or danger to the only person in this trailer we care about; Superman. Just shit blowing up. Which is all well and fine, I like some movies where shit blows up for two hours. But that is not what I want from Superman.

4.) Michael Shannon as General Zod? That's cool, but he is always going to be "Lynard" from Let's Go To Prison to me. Which was a great movie BTW.

5.) Pa Kent suggestion Clark should have let some kid die. Oh, come on now. Jonathan and Martha Kent were pretty much the ideal parents. They made Clark into the man he became. That was their strength, their power to be awesome parents and instill a sense of right and wrong into what will become the world's greatest hero. ...And "maybe" Clark should have let the kid die?

What did I like? Well, right now there is not too much for me to like. We have not really seen much to sink one's teeth into. Like I said initially, I want to be all about this movie. But right now I'm not.

What do you think? Did the trailer excite you or was it kinda there? Leave a comment below.

Are you heroes and heroines ready for the Man of Steel? We are still awhile away from the movie's release, but the WB marketing machine is really starting to open up with info on what I'm sure will come to be known as Justice League Phase 1.


Superman launches into flight in this trailer and there is one bit that could possibly be a great moment in the movie right here:

Looks like Superman is about to throw down with someone, hopefully Zod. Maybe he'll throw his ass into a big neon Coca-Cola sign. 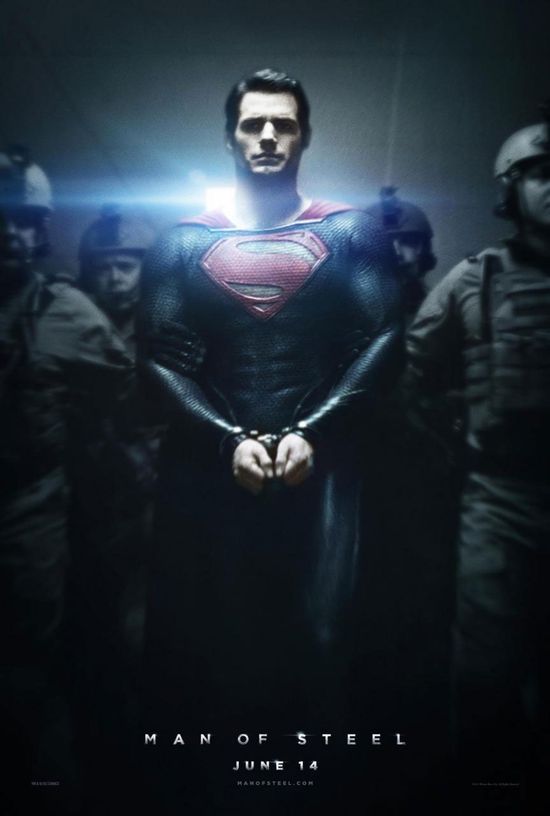 The new Man of Steel movies poster has been reveled. After a quick look at it, I'm left rather perplexed. Not as much with "Why the hell is the Man of Steel in steel cuffs?" but more like what is up with the WB marketing?

I mean, it appears they are trying hard to do away with the "big blue boy scout" image that Superman has had for the last 75+ years and make him more "gritty". 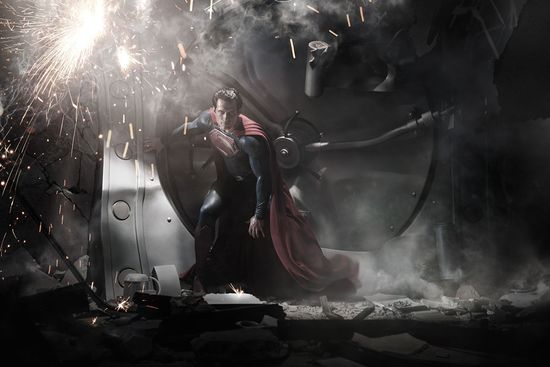 The first released promo image we got to see of Superman looked like he just cracked open a safe. This pic came to be known as "Bank Robber Superman" by me. Now you have him getting locked up by the man? Maybe Superman will spilt in two like he did in Superman III and this is his bad side.

Superman fans rejoice! The Man of Steel teaser trailer is out...or should I say "trailers," - plural - as there is an international version as well.

Let's take a look at them right here:

The teaser works perfectly giving you just enough to get you interested but still leaving you wanting more. My favorite part is the little kid wearing a cape and putting his hands on his hips striking the iconic Superman pose it's something we've all done and can relate to. We only catch the slightest glimpse of the Man of Steel in-flight.

Seeing this before The Dark Knight Rises, then watching it again online, it does look and feel part of that "realistic" universe. It would be very interesting to see what the futures will hold and what is part of the long term plans for this Superman will be.

Virtually identical to the one seen in the States, is the international version but with a different voiceover, the voice of Jor-El. If you have not seen that trailer have a look:


No real differences as far as visuals. But still, interesting all the same.

One thing I have seen online so, if someone has added the original John Williams score to the trailer which definitely gives one goosebumps. You can check that one out right here as well

Wow, that one gets me every time. It's going to be a long wait until the movie comes out of this can be a good one.