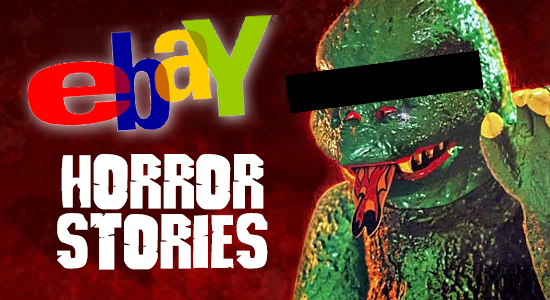 Ebay horror stories. We all have them. Personally, I have a few. This, my friends, is the latest one. It’s not the worst (I’ll tell you about that one another time) but it is the latest.

I love vintage toys. There is something about 70’s toys I really dig. The latest quest of mine has been the Mattel 1977 Godzilla. 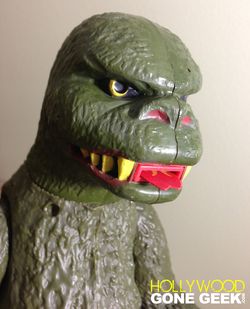 I remember seeing it in a Thifty’s store in San Pedro back in the day and for some reason I just didn’t pick it up when I have the chance. Regretted it ever since. It’s always been in the back of my mind this piece to my collection.

Godzilla was part of the Shogun Warriors line by Mattel. Released in the late 70s this figure stands almost 20 inches tall. A lever on the back of his head makes his “tongue”  stick out to recreate the look of him breathing fire. His fist even shoots off with the push of a button. So, as you can imagine, this would make an awesome part of anyone’s collection.

I have seen a few on eBay and finally decided to pull the trigger on one. After reading the description, I was satisfied with this one even though it had a few defects. The item description made note that the back lever was broken. Other than that, it seems alright:

“Plastic Godzilla toy is about 20in. tall. Body color is green. Yellow claws. Pressing button on right arm shoots right hand out. Launches fabulously. Behind the head is a lever when pushed down a plastic red flamed tongue sticks out. Lever is broke. Pretty descent shape to add to any Godzilla collection...”

After winning the auction at $90.99, I received the box about a week later. Excitedly, I took my item out of the box and stood him up. However, something was amiss. 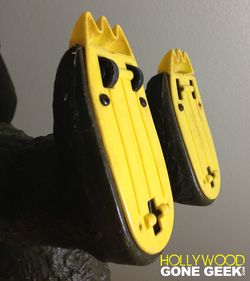 Godzilla did not stand flat. It seems that some of the wheels underneath his feet were missing. This was news to me. There were also several screws missing around his neck  that hold his head in place. “It’s not the end of the world,” I thought. But it did get me that the seller was not being completely honest in their description. They did mention the broken lever in his back but how could they miss that when standing, Godzilla stood kind of awkward.

Had I known, I may have looked at other options in a similar price range. Who knows, I may have went ahead with this one anyway. But, I would have liked at least had the opportunity to make that decision.

I reached out to the seller as you can see in the screen grab below. I didn’t necessarily want to return the figure because I know return the figure I would get jacked on the shipping. So I thought they may play fair and due to their own item listing discrepancy they may refund me a few bucks back.

Here is my email to them:
"Hello I received the Godzilla in the mail and have some concern. Three out of the four sets of wheels are missing. This was not noted in the description. It is very noticeable as the figure does not stand flat. How do you suggest we solve this. Thank you. " 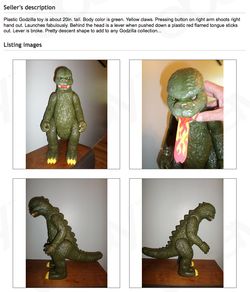 Yes it was described and yes it was pictured but lazily and not completely. Having read this became off as very asshole-ish. There was no “Hey, maybe it was my mistake” nothing even apologetic about selling me an item with an unlisted defect. Just pretty much a “fuck you.”  Especially the douchebag part here “it was a no return item...any questions?” ...Whoa.

As a matter of fact, I did have a question. I wrote back:
"Yes, can you please point out on the listing that stated or showed that the wheels were missing. "

Now, here’s where everything is kind of messed up. Ebay is not going to help me one damn bit. I have been through this before with another seller and even though they sent me some busted, broke items, all ebay will do is say “Hey return it and refund your money upon delivery confirmation that they received it back.” 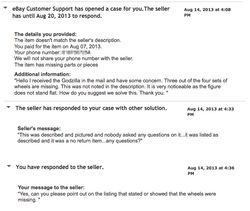 From ebay: “If your case qualifies and is eligible for eBay Buyer Protection, eBay will refund your full purchase price plus original shipping.” So... I will be out the money for shipping it back? Now this goes back to my mentioning that the schedule is nearly 20 inches. If you have ever shipped something the size you know it cost a few bucks. So now I’m put in the position of having to be out money because this person didn’t entirely list the facts about the item that they were selling.

It is a lose lose situation.

Am I being petty? Maybe. But, I mean, you want to get what you paid for. Why should you get any less than what you have given your hard-earned money for.

So at the end of the day the seller, “hotfinds4you,” kind of fucked me over. Now, I could leave negative feedback for him but of course this person would be apt to write some shit on my profile just to get back at me. And all be doing is hurting my own reputation on eBay.

So there you go. Now the real question? Do you know anybody who has some spare wheels for 1977 Mattel Godzilla figure?
@MonstarPR