So yeah. My planned 12 day tribute to Luke Cage was only 6. Unfortunately, I just didn't have enough time to dedicate to it. Which sucks because there is such a wealth to the character that I would like to revisit a Power-Man tribute again in the future.

When I first thought about the project it was going to be just me posting some of the more iconic cover and comment on them, but then it just kinda grew because I wanted to write about the different aspects of the character.

So expect to be seeing the Hero For Hire here on this site.

Until then, here is more Luke.

Counting the 12 Days Of Sweet Christmas - A tribute to Luke Cage, Hero For Hire continues. See the rest right here 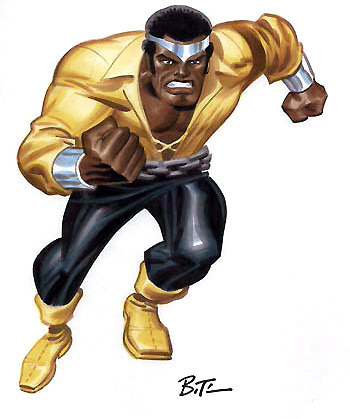 Luke Cage rocked the classic shiny yellow shirt, buccaneer boots and afro well into the 80's but alas, all good things must come to an end. Luke went through some "updates" that were "ok" I guess. I was not into them. 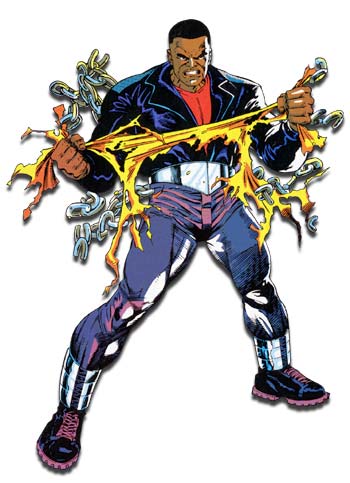 I don't dig my superhero looking like he was a bouncer at one of the clubs.

In what must have been the smartest move ever, they put ol' Mr. Cage back into a yellow shirt, slapped on some huge gauntlets and gave him a pretty bad ass new look. This guy looks like he can whoop some ass. While one can be nostalgic about the 70's, this is Power Man of the now. Go'on Luke, go get'em!

Counting the 12 Days Of Sweet Christmas - A tribute to Luke Cage, Hero For Hire continues. See the rest right here

Shockingly there has not been much in the way of cool things you could buy that showcase Power Man. Spider-man, you can find toothbrushes, soap dishes even a toilet seat cover. But what about Luke? Not a lot so let's cherish what we do have. 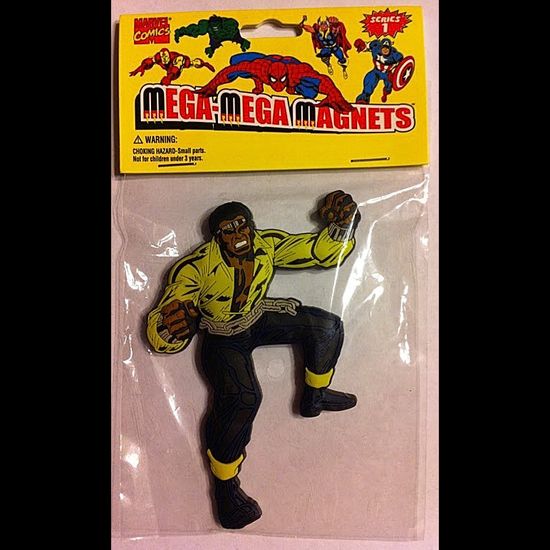 A really cool Magnet - I actually have this on my refrigerator right now. Get one from the good people of Mega Mega Magnets. Classic Luke, fists up and ready to keep you from over snacking. 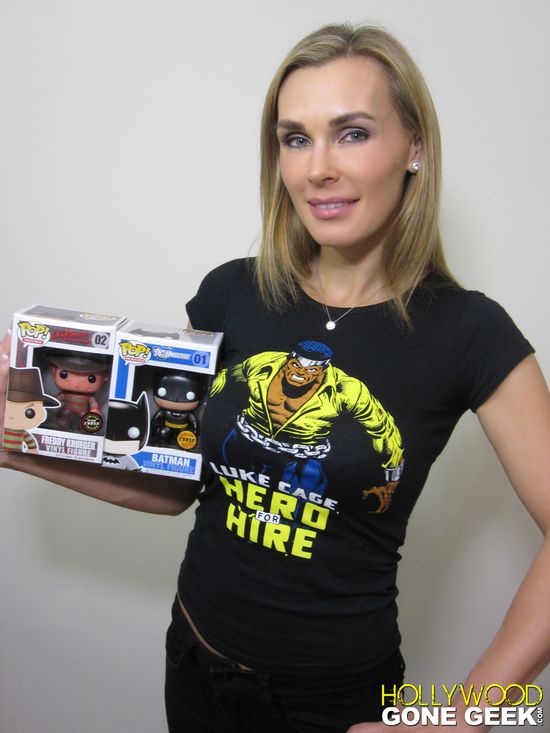 T-shirts - There are a couple of Luke Cage T-shirts, but like all things Luke, they are far and few between. Oddly, I have not seen one for guys, just in women's sizes. The lovely Tanya Tate models one for us right here while holding some of the Funko POP figures she reviews on (plug) JustaLottaTanya.com 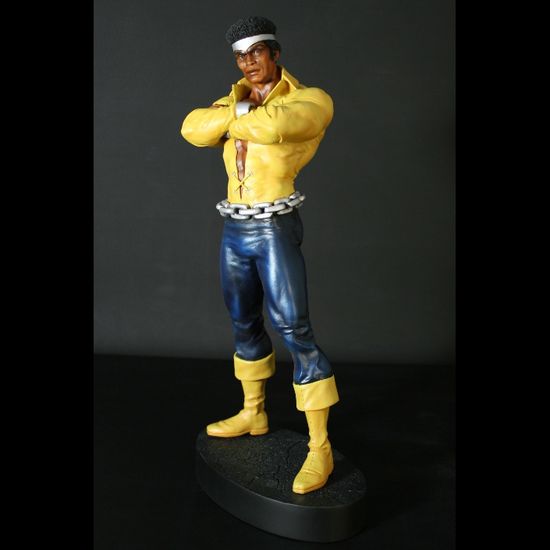 Statues/Busts - Bowen has made a few solid pieces. Whether you are into the classic 70's look or the modern Cage, they take care of you. 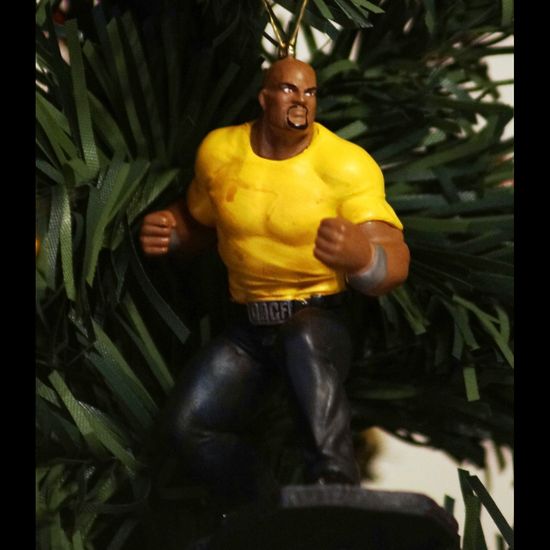 But that's about it. Maybe in the future we'll see more of Mr. Cage. I'm not saying I need Power Man Toaster (because I already have a Spider-man one), though that would be cool. 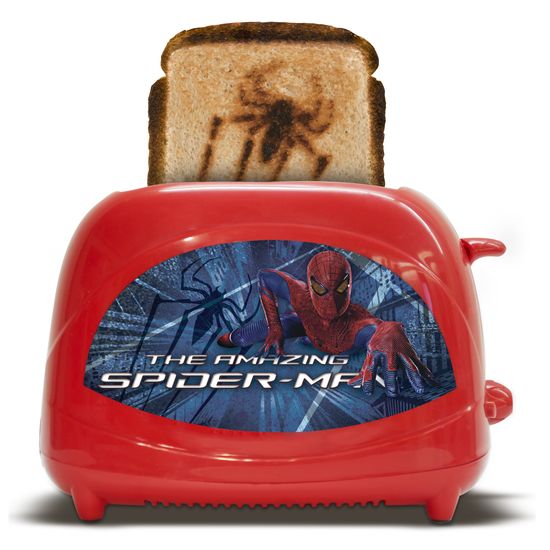 Counting the 12 Days Of Sweet Christmas - A tribute to Luke Cage, Hero For Hire continues. SEE HERE for other entries

There have been a few Power Man action figures that have been produced over the years. Some are hit and some are miss, but it is cool that Luke has been given some love by the Marvel Toy gods. 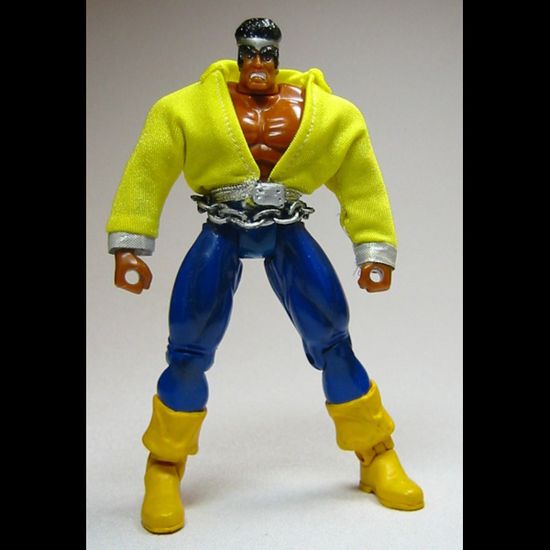 The first Power Man figure I had seen was the Marvel Gold one, which was pretty horrible. I mean, check out the thigh in relation to his head. What the hell were they thinking? I was never a Toy Biz fan and while I did dig the wide range of figures they produced, man, that is just horrible.

The best representation of a Luke action figure is the Marvel Legends figure. The articulation on this cat is incredible. Even his fingers are articulated. The sculpt is awesome, just an all around solid figure. 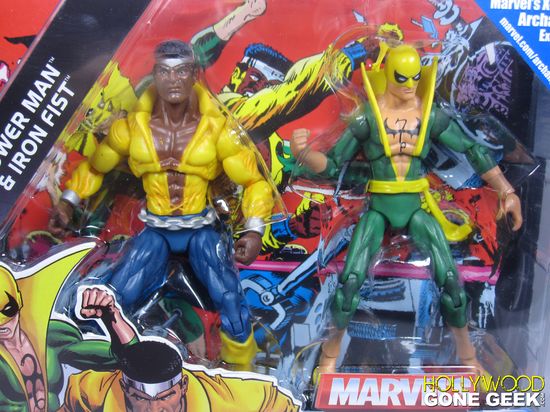 The second best Luke figure is the more recently released Marvel Universe 3 3/4 inch. This one came in a two-pack with Iron Fist which made this an easy buy. It really does not get better than this. I do want to note that Luke had a previous MU figure released, however it was of his more "modern" look. I'm not too big a fan of this one, as it just looks like some dude hanging out. 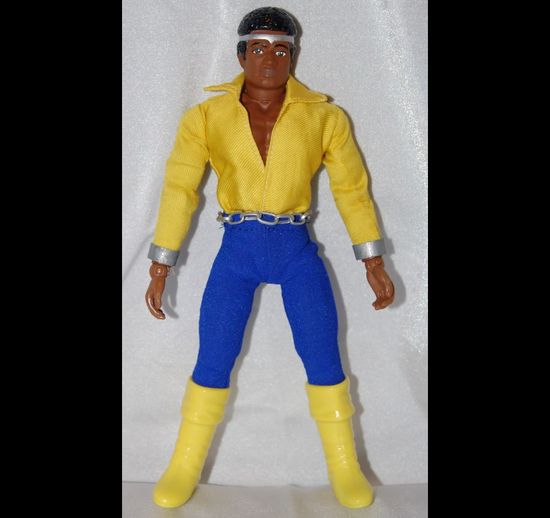 A missed opportunity was made by Mego in the 70's. Power Man would have been a perfect character for their World's Greatest Heroes line, joining the likes of Captain America, Human Torch, The Falcon, Spider-man and Thor. While it didn't come to pass, some creative individuals have taken to customizing their own versions, like the one above. Pretty awesome, I hope to make one myself. (Luke Cage custom by megalomaniac001)

So while there is not an abundance of Cage figures, he has found some representation in the medium; Minimates even has a Marvel's Zombies version of Luke. One figure that really needs to get made and one that I am holding out for is a Power Man Super Hero Squad figure. Now that would be Sweet. 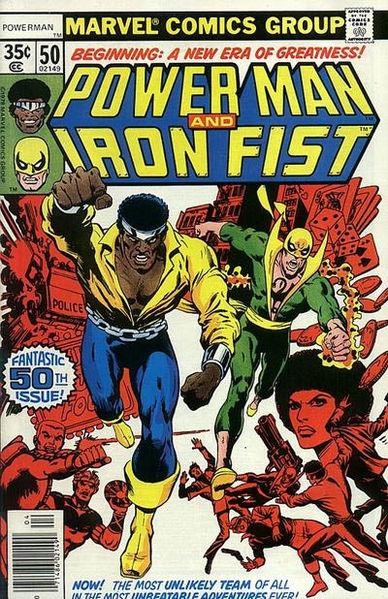 Power Man And Iron Fist #50
It says it right there on the cover; Beginning: A New Era of Greatness! And so it was for the next seventy-five issues. #50 marks the teaming up of Luke Cage and Danny Rand as Heroes For Hire. The striking cover images say it all, the heroes in vivid color rushing at you ready for action while in the background you get a glimpse of what they are going to be encountering; Gambling, the cops getting blasted, super powered bad guys, street crime and of course, hot babes. This issue marked an exciting new turn and perfectly captures the 70's vibe.

Counting the 12 Days Of Sweet Christmas - A tribute to Luke Cage, Hero For Hire continues. Amazing Spider-man #123
Another bad ass cover that features Luke is Amazing Spider-man #123. You have to hand it to Luke, he comes in as a guest star for an issue and how does he make his debut? By handing the star back his ass on the cover. Luke sends Spider-man flying high above New York City. Though I have no idea what a "Strap-Hanger" type is.

Luke Cage. He is a bad mother fucker. Created in the early 70's Luke busted on to the superhero scene in Marvel Comics' Luke Cage, Hero For Hire #1. Who is this man who kicked ass in a gold shirt and silver tiara? Luke was a man who was locked up for a crime he did not commit. While in the joint, he went through an experiment that made his skin super strong as well as increasing his muscles abilities.

Unlike most heroes, Luke did not go in for the common good...well, at least not as first. He became a hero to get paid. After awhile he began teaming up with another 70's creation, martial arts master; Iron Fist. Together they formed Heroes For Hire. Since, Luke has gone on to join The Avengers.

One of Luke's catch phrases is "Sweet Christmas!" And so is the name of this tribute to one of comicdom's most badass superheroes. Welcome to the 12 Days of Sweet Christmas. 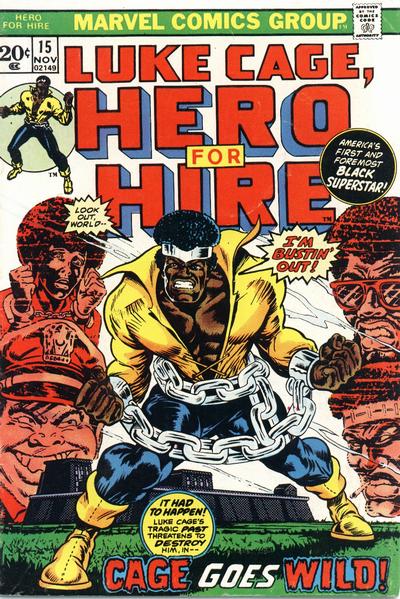 Luke Cage, Hero For Hire #15
The cover is incredibly impactful. Our hero, Luke, is chained but not for long! As his past has come back to haunt him, it can't keep him down. And chained he may be....He's busting out! You can see the rage on Luke's face, this is it man. Things are going to go down. Great cover and my choice for number twelve.