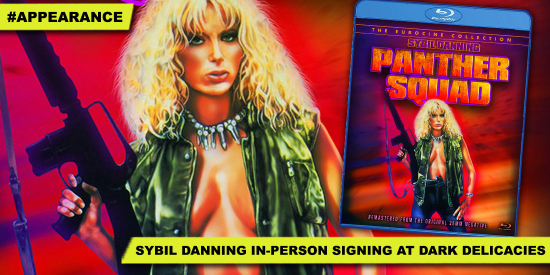 Saturday, February 15th, Sybil Danning will make an appearance promoting the release of Panther Squad on blu-ray and the new issue of Delirium Magazine.

Cult movie icon Sybil Danning is set for a signing appearance at Dark Delicacies. Known for films like Battle Beyond the Stars, Malibu Express, Howling II: Your Sister Is a Werewolf, and Reform School Girls, Sybil will be on hand to sign copies of the newly remastered Panther Squad. Making its Blu-ray debut from Full Moon Features, the movie has been remastered in Hi-Def from the 35mm negative.

The blonde, buxom Danning stars as Ilona aka The Panther, a hotter than Hades heroine who packs a punch and looks lethal poured into her barely-there leather outfit. When a famous astronaut is held captive by a group of murderous environmental extremists, world leaders turn to The Panther Squad, a group of vicious (and viciously sexy) female mercenaries to search, rescue...and destroy. Will they succeed? Naturally, and they'll look sexy doing so!

If you can't make it to the signing, you can still pre-order a signed blu-ray copy of Panther Squad right here: https://www.darkdel.com/store/p1574/NOT_ATTENDING_ONLY%3A_Sat%2C_Feb_15th_4_pm%3A_Panther_Squad_BR.html.

Don't miss out on meeting Sybil Danning and getting a signed copy of Panther Squad. It's all going down at Dark Delicacies in Burbank on Feb. 15th.

Saturday, February 15th, Sybil Danning will make an appearance promoting the release of Panther Squad on blu-ray and the new issue of Delirium Magazine.