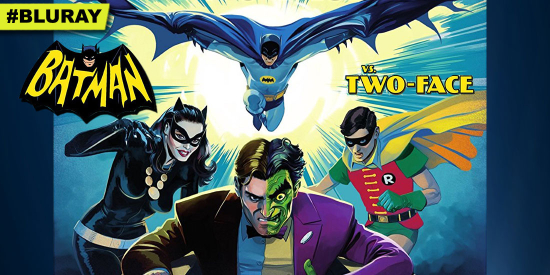 The follow-up to last year’s hit Return of The Caped Crusaders animated film reteams Adam West with Burt Ward (Robin) and Julie Newmar (Catwoman). In Batman vs. Two-Face, Star Trek actor William Shatner voices the sinister Two-Face, a villain that was never seen in the original Batman ’66 series. Even though Harlan Ellison wrote an eleven-page treatment for a Batman series episode, "The Two-Way Crimes of Two-Face", the episode was never produced.

Now we get to see Batman take on Two-Face in this all-new animated adventure. The trailer for Batman vs. Two-Face has been released and it features not only the above characters but a strong showing of Batman’s TV show rogue gallery…and a few other surprise appearances. Watch it below and be prepared to pause the video!

Synopsis:
Holy coin-flipping conundrums, Batman! When a device meant to remove evil from the criminal mind goes haywire, Gotham City's D.A., Harvey Dent, is transformed into the sinister split personality Two-Face! Add in the crime-creating chaos of The Joker, The Penguin and The Fiddler, and the Dynamic Duo may be overwhelmed and outmatched. Can a helping claw from the coy Catwoman unravel this confounded case and foil Two-Face's maniacal endgame? Starring the legendary voice talents of William Shatner as Two-Face, Adam West, Burt Ward and Julie Newmar, this all-new DC Animated Movie is destined to thrill Bat fans one and all! 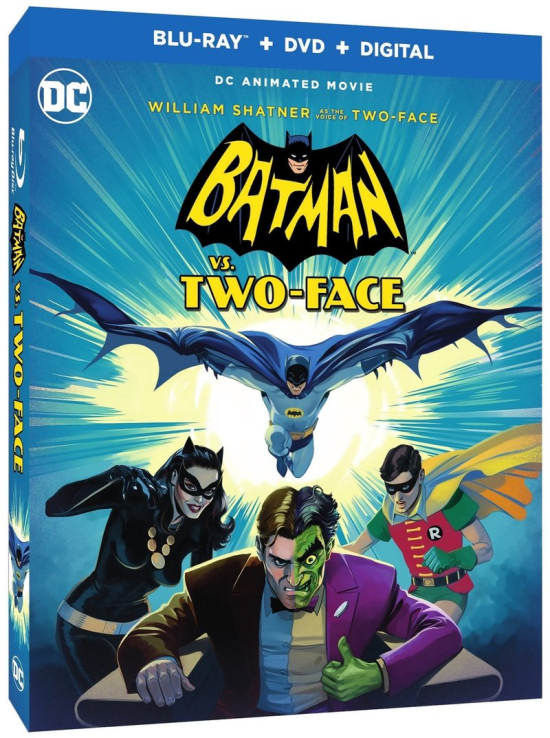 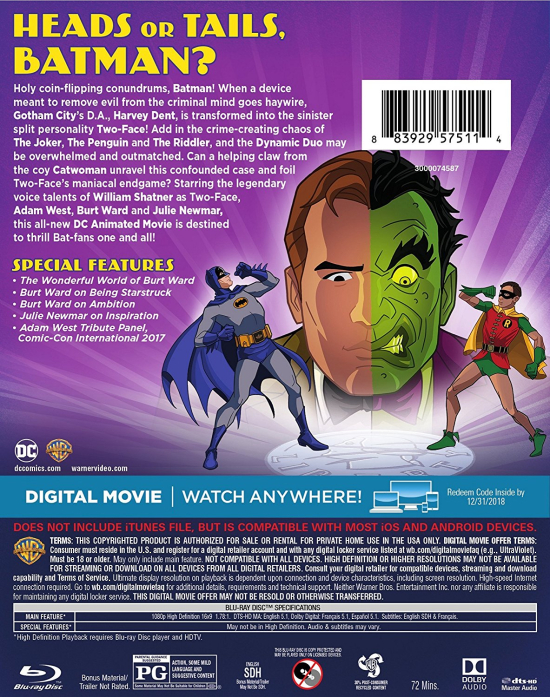 The VOD / Streaming version can also be pre-ordered: http://amzn.to/2goZutJ.

Special features on the DVD / Blu-Ray releases include:
• The Wonderful World of Burt Ward (Spotlighting Burt Ward's life away from acting, particularly his many benevolent activities, and his lifelong devotion to the health and welfare of dogs.)
• Burt Ward on Being Starstruck
• Burt Ward on Ambition
• Julie Newmar on Inspiration
• Adam West Tribute Panel, Comic-Con International 2017 (At the 2017 Comic-Con International in San Diego, a panel celebrated the life and times of the late Adam West, the legendary "Bright Knight." Fans laughed, cried and cheered as actress Lee Meriwether - Catwoman from the 1966 Batman movie, and more captivated the audience with anecdotes and tales about Adam West.

Don’t miss out on the Bat-tastic finale to Adam West’s career. Get your pre-order in for Batman vs. Two-Face!