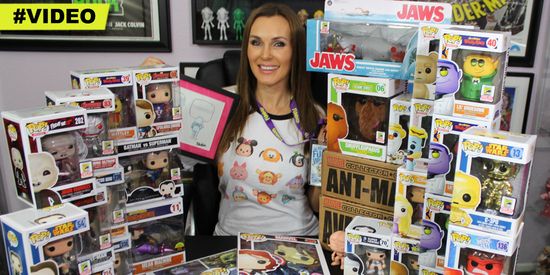 Want to see all the goodies I brought back with me from the 2015 San Diego Comic Con and Funko Fundays event? Watch this video!

So I went to the 2015 San Diego Comic Con last year and had a lot of fun. One of the booths I stalked was the Funko booth. As you know I am a huge fan of their POP! vinyl figures and have a few hundred of them. It was a bit of a challenge to get to the booth as there were loads of people trying to get in. I was fortunate enough to get my chance to buy the exclusive figures and I bought a lot, which you’ll see in the video.

I also went to the Funko Fundays event. It’s put on by the company for the fans and its one big party. There were loads off giveaways and cools things going on and that as well, you’ll see in the video below.

I will be going to San Diego Comic Con this year and will have more information soon on where you can meet me and what I’ll be doing while there. So stay tuned. And if you have not subscribed to my Channel on Youtube here!

Want to see all the goodies I brought back with me from the 2015 San Diego Comic Con and Funko Fundays event? Watch this video!