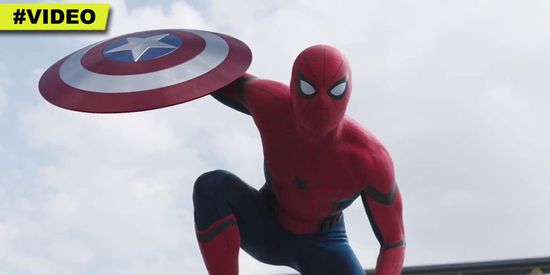 With still just under 2 months to go until Marvel’s newest movie hits the big screen we are treated to a new trailer that is sure to leave you in a geek-gasm.

The tension builds as we see Steve Rogers standing against Tony Stark’s notion that heroes need to be regulated in light of the tragedies that occurred in pervious films. Ant-Man, Vision, Black Panther, War Machine, Black Widow, Scarlet Witch, Hawkeye and The Winter Soldier are all seen as the lines are drawn pitting hero against hero. As the trailer comes to a close we see both set of teams racing towards each other in what is sure to be an unforgettable battle.

The big bombshell of the trailer is saved for the very end when a friendly neighborhood super-hero makes a Marvel Cinematic Universe debut.

Watch the jaw-dropping trailer below:

Now tell me you didn’t just shed a tear.

Marvel’s “Captain America: Civil War” finds Steve Rogers leading the newly formed team of Avengers in their continued efforts to safeguard humanity. But after another incident involving the Avengers results in collateral damage, political pressure mounts to install a system of accountability, headed by a governing body to oversee and direct the team. The new status quo fractures the Avengers, resulting in two camps—one led by Steve Rogers and his desire for the Avengers to remain free to defend humanity without government interference, and the other following Tony Stark’s surprising decision to support government oversight and accountability.