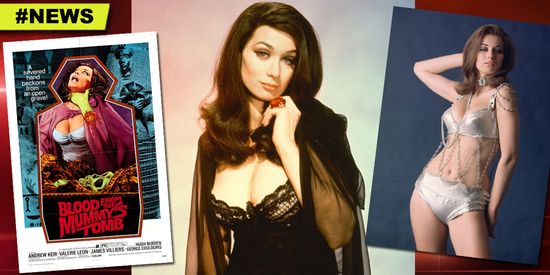 Star of Hammer Films’ Blood from the Mummy's Tomb, Valerie Leon will be appearing at the upcoming Hollywood Show.

I’m a huge fan Hammer Horror fan, so I was pretty excited to see Valerie Leon will be at the January Hollywood Show. The event features loads of stars and celebrities from TV and movies.

If you have not see the movie, watch the trailer for Blood from the Mummy's Tomb:

Valerie also starred in the Carry On series and was even a Bond girl appearing in The Spy Who Loved Me. Make sure you save the date and meet this icon of “Hammer Glamour.”

The Hollywood Show is set to take place on January 9th and 10th, 2016 at the Westin Los Angeles Airport Hotel located at 5400 West Century Blvd. in Los Angeles. Ticket and other information can be found on the show’s official website here: http://www.hollywoodshow.com.

If you can't make it, you can order some cool merchandise from Valerie's website here: http://www.valerieleon.com.

Star of Hammer Films’ Blood from the Mummy's Tomb, Valerie Leon will be appearing at the upcoming Hollywood Show.