Home About Twitter Facebook Events
#VIDEO: Watch Stan Lee Teach The Art Of A Cameo In This Hilarious Audi Commercial
#VIDEO: Up, Up And Away! Watch The Supergirl Preview Video!

#REVIEW: The Death of Superman Lives, What Happened? Is More Powerful Than A Locomotive 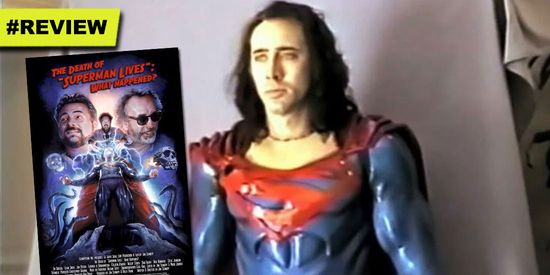 In 1998 there was supposed be a new Superman movie. One that was to be a radical departure from the previous Christopher Reeve films but was somewhat based on the existing comic book arc The Death and Return of Superman. The film would have seen Superman die at the hands of the unstoppable Kryptonian creature Doomsday, then resurrected to face villains Lex Luthor and Brainiac. Batman producer Jon Peters spearheaded the project that would have Tim Burton direct and Nicolas Cage star as Superman. But it was never to be. 3 weeks before the movie was to start filming, it was canceled. The documentary Death of Superman Lives, What Happened? takes an in depth look at the movie that was never to be.

Director Jon Schnepp wastes no time in getting into the thick of things with interviews that span key crew members including writers, costume designers, art department and more. The movie is filled with anecdotes, visuals, and test footage from the the ill fated Superman film. Artwork depicting Doomsday, Brainiac, alien creatures and more are seen as artists explain the directives they were given. 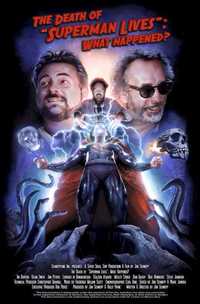 Kevin Smith, who wrote an early draft of the movie, has infamously shared his experience working on the Superman Lives script before as part of his speaking engagements but now digs deeper for new revelations. The dueling recounts by Smith and producer Jon Peters make for some of the most entertaining moments of the film.

Of all the crew members that are interviewed, Peters easily steals the show with his off the wall perspectives and the sharp left turns he randomly makes. From casually dropping the factoid that he was in 500 fights to his skewed view of what Superman should be to his admiration of a spider’s place in the insect world, you never know what he’ll hit you with next. I have no idea what world he lives in but it seems like a lot of fun.

The moments we see Nick Cage in costume are fascinating. The initial shock hits you - no way is this Superman. But as the documentary reveals more of him, the walls of doubt turn into curiosity. Then the realization is there - you want to see Cage leap over a tall building in a single bound.

Unfortunately Nicolas Cage was not interviewed for the film and pretty much the only key player absent. Though there is a wealth of test footage featuring Cage, it would have been nice to get his opinion on the project.

There is so much right with this movie that it’s hard to find any fault. Aside from missing Nick Cage, I would have liked to seen what was the aftermath of stopping Superman Lives. What impact did the trashing of Superman Lives do to comic books movies as a whole? What was the effect on the Superman’s live-action future? It would have been great to have a coda added on, especially for non-geeks who weren’t waiting years for a new comic book based movie, to give them a sense of anticipation that a new Superman movie would have had.

For fans of the genre it’s a given that this documentary is a must see film, but even casual fans will be drawn in. Jon Schnepp takes us on a journey to witness what may have been the most unique superhero movie ever. The ride is not just jaw-dropping, but leave you believing Nicolas Cage could fly.

The Death of Superman Lives, What Happened? is in limited release now.

#REVIEW: The Death of Superman Lives, What Happened? Is More Powerful Than A Locomotive