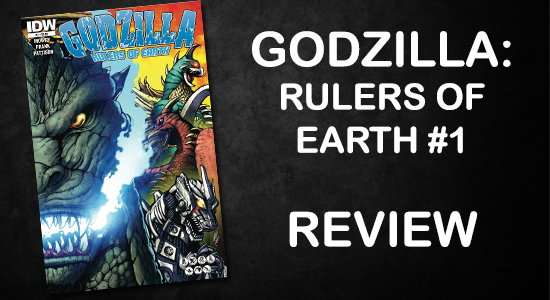 The King of Monsters roars.

I like Godzilla. While I’m not overly versed in the near sixty year history of the kaiju (Japanese giant monster) icon, I am familiar with the movies; I have many in my collection that I enjoy on a regular basis.

I’ve been aware of the previous books that IDW had been putting out and had some curiosity, but I never bit until now. The title for this new series alone is pretty irresistible; Godzilla: Rulers of Earth. So, this has been my first foray into Godzilla comics since the Marvel issues of the 70’s and I didn’t know quite what to expect. I also don’t know how much this series is tied into continuity (previous IDW series or the movies) but even only armed with the basics, I was able to jump in and go for the ride. 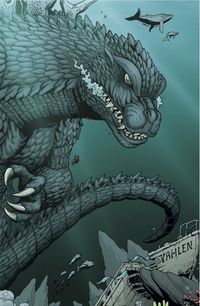 A possible Godzilla sighting by a submarine launches the story as we are set in a world were big monsters roam the world. We’re give some background on where the other monsters residing on earth are and even see a rumble between Gigan and Kumonga that also serves as some foreshadowing. In Honolulu, a Megazoology conference takes place and is where we meet some of the human characters of the story. A giant monster arrives and begins to wreak havoc on the island. The story ends on a real nice cliffhanger; Godzilla shows up and is about to throw down with the other recognizable kaiju.

Monstar Likes: The art in this comic was awesome. Matt Frank really knows how to go big. If this were a movie it would be pretty damn incredible. His Godzilla is spot-on. Chris Mowry keeps the story nice and tight, building up suspense as well as having fun it. There really isn’t a dull moment. The parts of Godzilla movies that kinda derailed my attention were the humans at ground level. But the characters crafted in this book are pretty damn interesting in their own right and I want to know what happens to them.

Monstar Dislikes: You know, I really didn’t find anything to dislike. Maybe a “story so far” paragraph on the splash page to get an indication where this fits, continuity-wise; in case I wanted to get some more background. But to be honest, it’s not a real necessity.

Monstar Verdict: After checking out this issue, I was very pleased. It’s a solid read. Godzilla: Rulers of Earth #1 is a really fun book and I look forward to the next issue. You don’t have to be a hardcore fan to dig this read, just know giant monsters are about to go head to head and you have a ring-side seat. 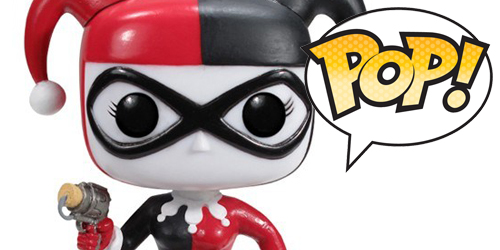 Ready for a POP! vinyl figure update? Funko has several new characters coming out in the DC Comics series making their . This assortment is very Batman character heavy, including heroes and villains from the comic books, Dark Knight movies and even the DC animated universe. This assortment also includes the major baddie of the DCU, Darkseid. Let’s have a look shall we!

The Joker - The Dark Knight 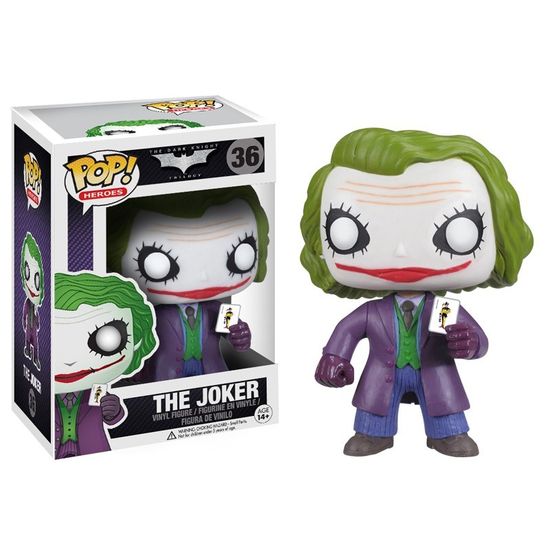 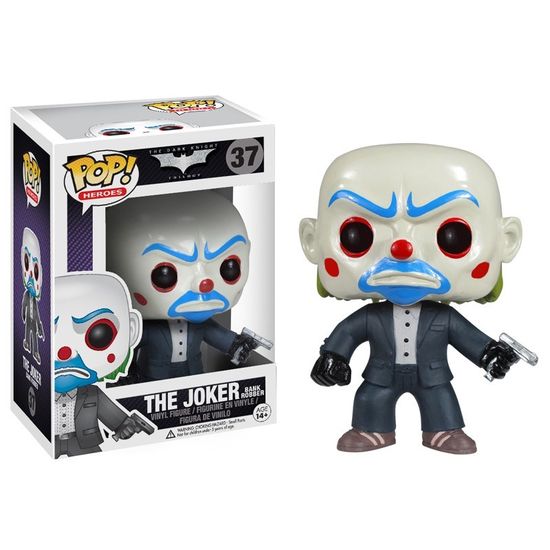 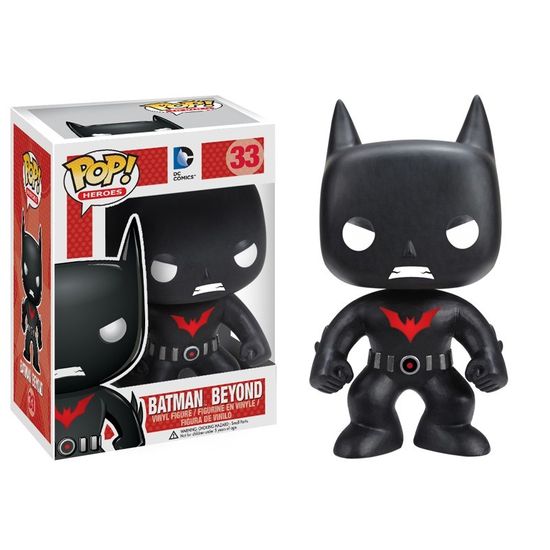 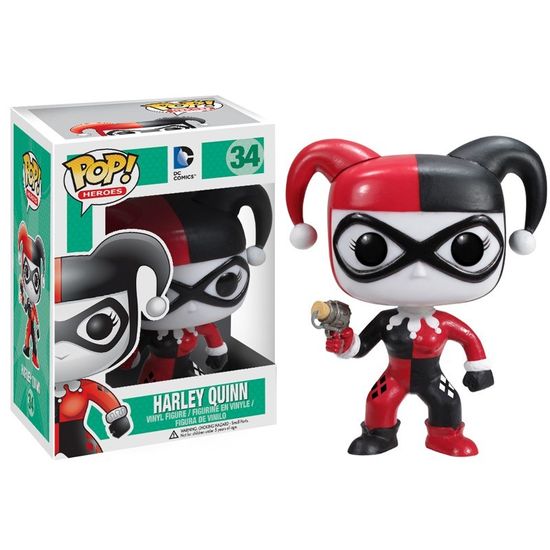 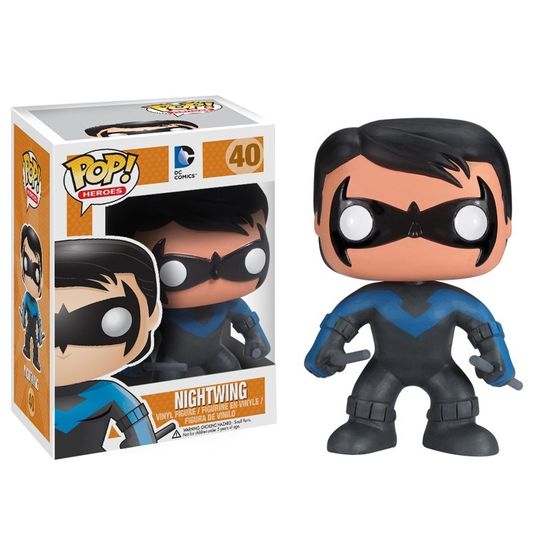 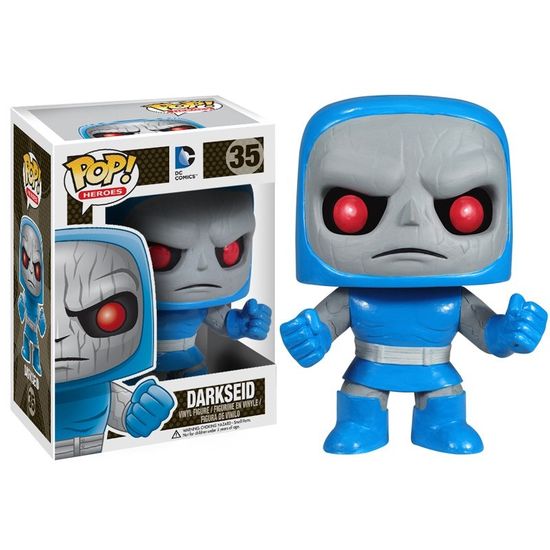 Amazon has some of these listed to be available August 1st. Click on the link to be taken to the product page!

Oh man. I’m having a hard time keeping up with all these cool figures and they just keep coming. Definitely getting the Darkseid and Harley Quinn figure and maybe the Joker as well. Are you going to be adding any of these to your collection? Which ones? LMK by leaving a comment below!

Sure, World War Z may have just been released last week, but already Amazon has made the Brad Pitt feature available for pre-order on Blu-Ray and DVD. If you are so inclined, you can be among the first to secure a copy of the big budget apocalyptic thriller now by clicking here. 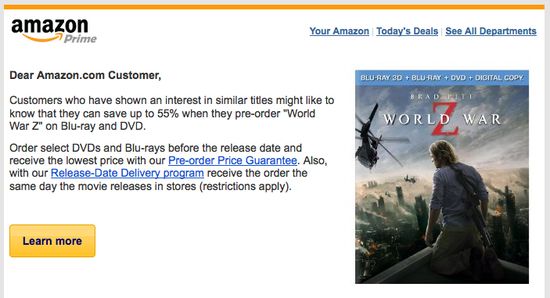 While no significant information has been posted (the release date of the media, special features, etc.), there is Box Art and Pre-order prices.

EVENT: Superman Max Fleischer Cartoons Back On The Big Screen 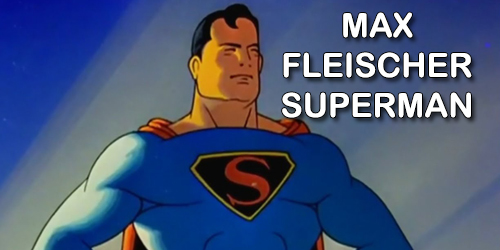 June 29th, classic Man of Steel animation soars back on to the big screen. This Saturday night at the Egyptian Theatre in Hollywood there will be a special screening of the classic Max Fleischer Superman shorts of the 40’s.

In celebration of the iconic DC Comics character’s 75th anniversary, a special night will be dedicated to Superman’s first foray into animation. Hosted by animation historian Jerry Beck, the screening starts at 7:30pm.

More info can be found on the Egyptian website here. The Egyptian Theatre is located at 6712 Hollywood Boulevard in Hollywood. 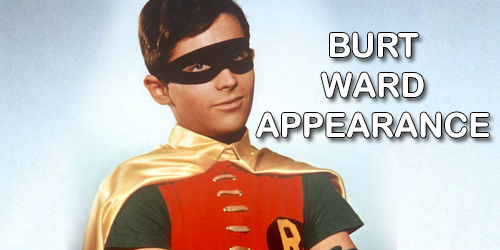 Holy Hollywood! Batman sidekick Robin, Burt Ward, is making a special signing appearance June 29th...and he’s bringing the Batmobile with him. In the heart of Hollywood, from noon to 3pm, former Batman ’66 star Burt will be available for photo ops and autographs. The event is by In Person and offers several different packages in which you can attain autographs and/or photo ops from the star.

Also at the event will be the show’s Batmobile and you have the opportunity to get a photo with that as well.

If you can’t make the event, you can actually order an autograph from the In Person.

More info on the event and ticket pre-orders can be found here: http://bertwardinperson.eventbrite.com/

I’ve always been a huge fan of the ’66 Batman. There was a time where there was a great disdain for it in the fandom community, because of the campy pop tone of the show. But now I think the show has been accepted for what it is, of which I’m glad. It really does have it’s own merits. I’ve been fortunate to meet several of the cast, including Burt, and think it’s very cool that events like this exist.

So if you are a fan of the show or just want to meet the actor, this is a great way to spend a Saturday. 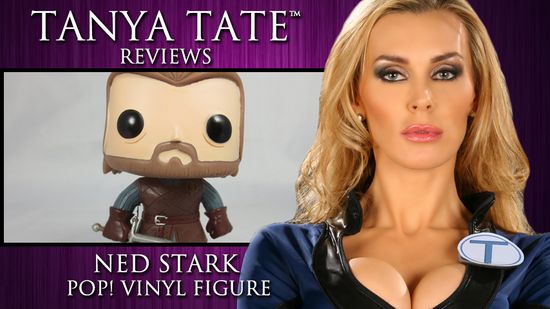 With this video I start my video review series of the Game of Thrones vinyl POP! figures from Funko. From wave one is Ned Stark, who you may remember was played by Sean Bean in season one of the show. I really like his work, he’s a brilliant actor. So let’s have a look shall we?

Next week I’ll be looking at another in the Game of Thrones series, so don’t miss it. Until then, let me know what you think of this video review by leaving a comment below.

DKE will have a very special GID version of Crapzombies by Van Beater at the "CON" next month. Each pair of Crappy Cat and Flunk Monkey comes with an 11×17 signed, stamped and numbered print. $25 for the set. Limited to 100 sets. So do yourself a favor and cruise by the DKE booth #5045 at SDCC and snag a set! These are some slick looking goolies. 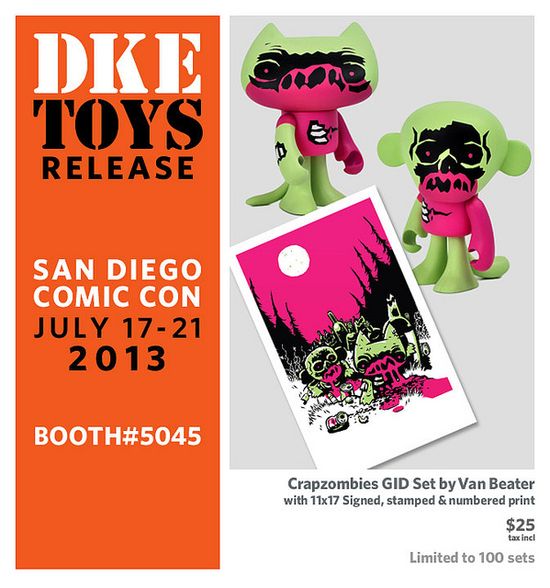 When Park Starz Series 1 launched the first variant "Haunted Mansion's Ghost Bride", everyone went nuts! That figure was a complete sell-out. Looks like the first variant of Park Starz 2 will be in the same boat. The glow-in-the -dark Bellhop variant will vanish fast! Be sure to make it down to D Street on Friday, June 28th and pick one up for $24.95. Don't get all spooked-out yet about not getting one, it's a Limited Edition of 2000. That's 1001 more then the Bride variant. So, hopefully there's plenty to go around. No word about online sales yet. 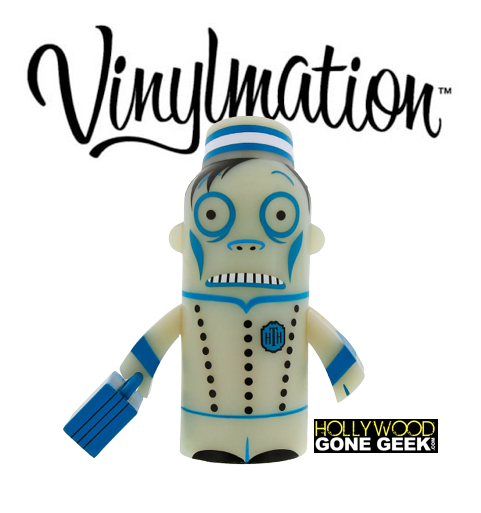 Gary Baseman's Creamy vinyl toy will be available at the 3D Retro/Kozik booth at SDCC! Garys art work for the most part has something dripping out of one of his characters. This toy brings that to live with the little ice cream guy all melty and drippy... YUM. We adore this piece and plan to grab one indeed. Creamy retails for $55 and has a edition of 200. He stands about 5 inches tall and also GLOWS IN THE DARK! Be sure to check them out at booth #5051. 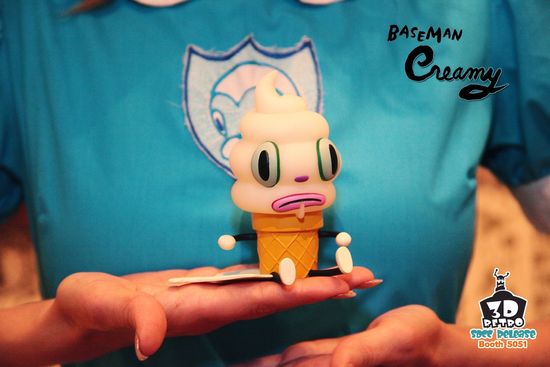 Super7 at SDCC with New Exclusives! 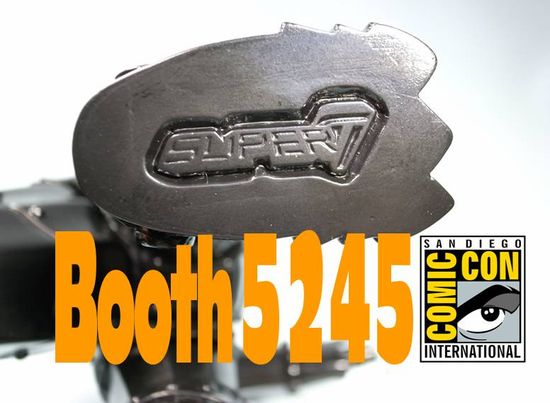 SDCC is just around the corner and Super7 will exhibit once again with some new vinyl exclusives and t-shirt designs. Super7 just finished up their anniversary bash with Lucky Bags filled with awesome new goodies, so we can't wait to see what they will bring to the table at the biggest event of the year.

The above picture is just a teaser. S7 will be adding more details to their exclusives closer to the event and we hear they're going to be mind-blowing. Keep checking back for info on their new vinyl pieces and even some ALIEN ReAction Figure surprises!

Mark your map now for the new Super7 location... 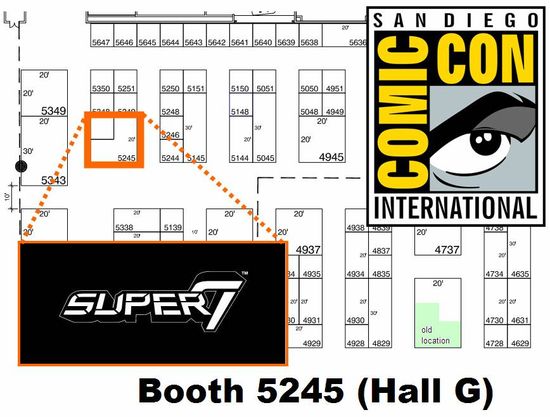 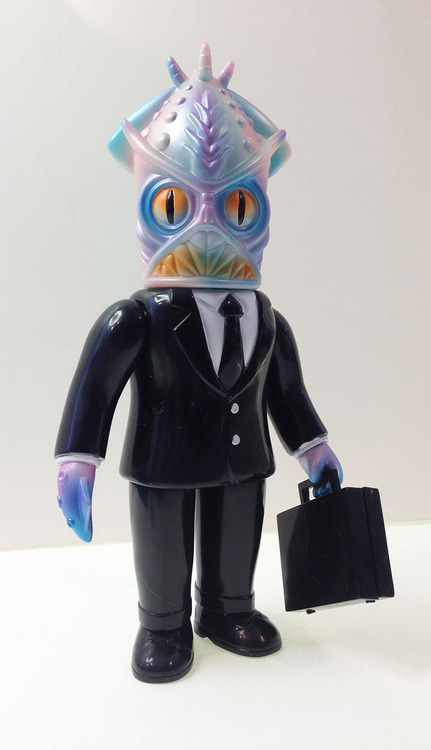 This figure is so damn cool! I was on Frank's blog and this splendid product shot for sure caught my eye! I follow Frank on Instagram and I believe seeing a picture of him cutting his finger real bad trimming these vinyl figures. So don't just buy this because it's incredible, grab this also because it was made with blood, sweat and maybe a tear (who knows). This is straight from the source...

We all know the Game is rigged…the key is to simply not play the Game…or at least cheat. What better way than to acquire your very own member of the Secret Shadow Government? Well, now you have that chance! Once purchased, your very own Mr. Halliburton will obey your every command and whim! You CAN change things! These Overlords are only available in limited quantities so act quickly! Fixing the world’s problems has never been so easy!

Limited to an Edition of 30 pieces!

Only 1 per household please!

DON'T FORGET TO SET A REMINDER ON YOUR TRUSTY PHONE!!! 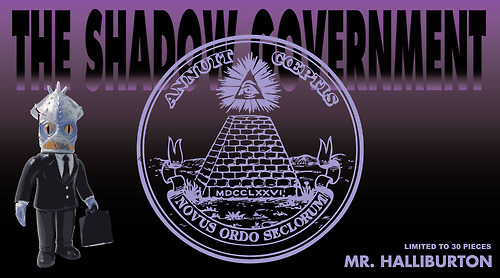 The Loyal Subjects has created some of the coolest vinyl toys around. But these little guys will bring you straight back to your childhood from the 80's. First they brought us the G.I. Joe Mini Series and now the wait is almost over for the new Transformers Mini series One! This series is a blind-box set of 3 inch vinyl figures with 7 Points of articulation! That's impressive for a 3 incher. They also include weapon accessories and stat cards. You can purchase them now through The Loyal Subjects online store for $12.99ea. or $208 for the case. They ship within 30 days. The set features OPTIMUS PRIME, BUMBLEBEE, JAZZ, SOUNDWAVE, STARSCREAM, GRIMLOCK, MEGATRON, THUNDERCRACKER and 3 very sought after Chase figures - ratios 1/24, 1/48 and 1/96. So get ready to rip open some Cybertron foil trying to score a rare chase! G.I. Joe series is for sale now! 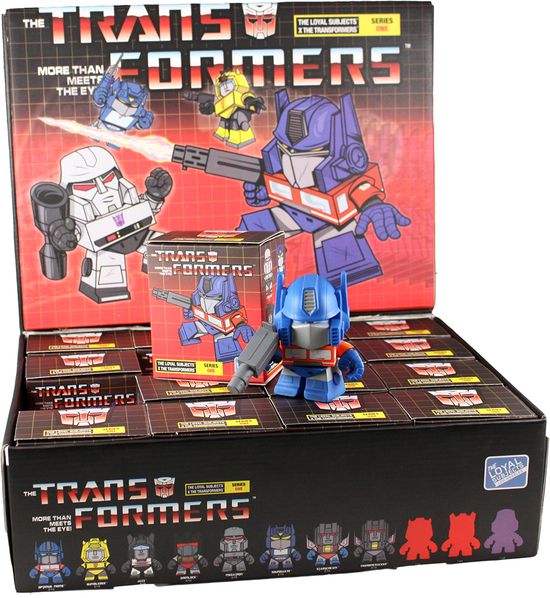 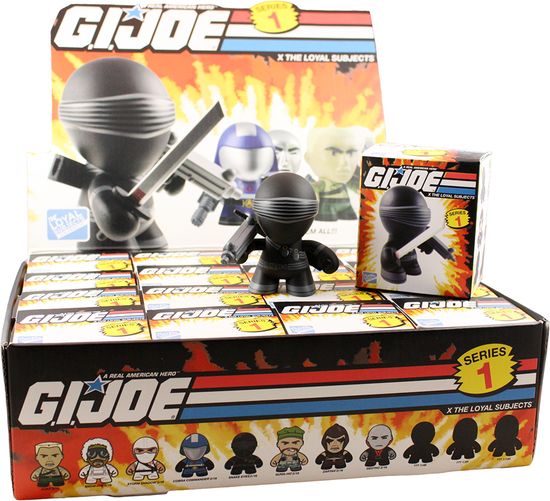 I saw that and the first thought was "Who the hell is Japan Cinema?" The second was hash-tagging "gross" is a limp insult that something a t'ween girl would lob, but still it's an insult all the same.

You know what is "gross"? People who want to knock others for cosplaying. You would think that people who were part of the cosplay community, or wanted to it to grow would be a little more proactively positive than acting like a 13 year old hipster.

I have no idea who from Japan Cinema tweeted that and I have no idea what Japan Cinema was but they really did come off as elitist assholes. Kudos to them. Oh wait, they have been around since 2009 and have interviewed a bunch of people. That must give someone there the right to hurl hashtags. Give me a couple of years so I can start feeling that sense of entitlement. Maybe I can try and make people feel bad about their career choices when it's none of my business.